Off the Record
K.A. Linde

Come to Me Quietly
A.L. Jackson *I actually finished my rant, and it's definitely messy and longgggggg LOL* 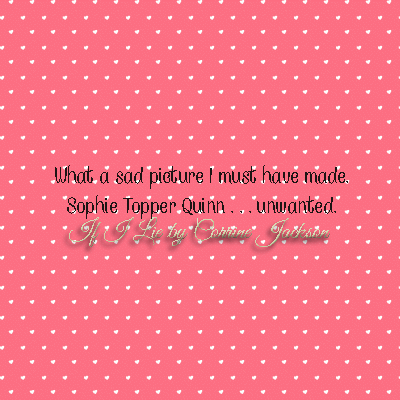 Lets start with her hometown. A military town called Sweethavens. A shitty hometown I'd say. A very shitty town filled with judgemental and selfish people.

The military is the backbone of our community, helping us to stand tall. Giving us pride because our men and women are serving our country.
But to be a part of our military town, you have to pay a price.

By a price, it simply means that EVERY freaking THING came with a price. And Sophie had paid the damn price since she was a kid...And the price was sadness layered with pain, sorrow and loneliness.

Sophie was DEMANDED to pay the price when she kissed Blake. Her boyfriend was Carey while the boy she kissed was their friend, Blake. So what does that imply? She cheated. But that was the Sweethaven's society kind of truth. Blake's kind of truth would be different: Sophie lied to him and seduced him into cheating with her. But what about the 'real' truth? The 'real' truth would be: She didn't cheat. She wasn't dating Carey. She was single and damn available. And she kissed a boy she loved.

If Carey were here, he would have poked at Blake until he stopped acting like a prick. Then Carey would have scolded me for being such a bitch to Blake because the guy was doing the best he could, given the circumstances. If Carey were here, I would tell him to take his damned secret and shove it.
But he’s not here. And I won’t break another promise.
So I will pretend we were still together when he deployed, lying to our best friend and everyone who hates me for cheating on him. And I will forget that he broke up with me two days before those pictures of Blake and me were taken.
Because then I would have to remember how Carey had admitted that he loved a boy.

Why not EXPLAIN that to the damn society and to Blake? Because..

It turned out “Don’t ask, don’t tell” also meant “Don’t get caught.”
Carey broke that rule and paid for it.

And even though it hurt her, she will protect that boy because she loved him! Unlike tons of cliche books out there, I actually get why she loved him. He wasn't an asshole, he was a good guy. He was always there for her. He just couldn't love her the way he was supposed to.

“I won’t ever let you down,” he promised, his voice cracking a little.
And I believed him.

Don't worry, Sophie was a very 'experienced' girl when it comes to paying the price,

She was first forced to pay the price by the person she had loved the most, her Mom, six years ago. *cue in: my gun pointed directly at that bitch* What did her Mom do? She left.

She drove away with Uncle Eddy, and I guessed she was leaving my father.
But I never—not once—expected her to leave me, too.

Fast forward to NOW, and she met the BITCH her Mom again.. (*sighs* Obviously, the fucking bullet missed my target!)

She saw me. My mother saw me and walked away like I was nothing.
Again.
I break.

Before you start assuming that I'm an oversensitive psyco who loves judging people based on a mistake alone, I'll explain why you shouldn't.

The BITCH Her Mom didn't remember or recognize her and had to be told that she was her daughter! She even lived nearby and didn't bother keeping tabs on her ONLY daughter! She did try to meet Sophie again later on, after LEAVING her, but like a real COWARD, she stopped trying when Sophie's dad refused to let her meet her. I can't forgive this because, that's what COURTS are for! Seriously, WTF?! (I have a feeling that she wasn't her real mother and that she was an evil witch who had stolen Sophie from a NICE family, because it would be impossible for such a goodhearted girl to be born by such a HEARTLESS woman!!)

And to make Sophie's life sweeter, her mom actually left a title for her when she cheated with her uncle and left: "A Cheating Slut".

...all of Sweethaven thought I’d become her too: the town slut cheating on her Marine

I’m nothing like her.
I would never walk away from someone who needed me. I stay. Even when things get bad, I stay.

Yeah, she was that 'good' at being a mother.

But hey, if we have a mother, we need a father too, right? So lets meet the father. Sophie's COLDHEARTED (even colder than a fridge in winter!) father, her mom's perfect match. Her mom left Sophie with Him.

“How was school?” How did you screw up today?
“Good, sir.” It sucked.
“You did your homework?” At least you have good grades (i.e., are not a complete failure).
“Yes, sir.” The better to escape Sweethaven.
“Make sure you load the dishwasher. I have work to do in the study.” I’d rather work than spend five more minutes with you.
“Yes, sir.” Please look at me.

She existed but he treated her like she didn't.

He passes me a plate of peas, instant rice, and steak, and I sit across from him at our round table. The entire force of his considerable concentration is focused on eating. I see his strategy—to ignore me—but knowing that doesn’t make it any easier to withstand. He cuts his steak into small, equal pieces, but I am the one he slices.
Me:
Him:
The peas have rolled into the rice like green snow on white grass. I use my fork to separate them, and shovel a few into my mouth.
The muscles in his forearms shift. Fork to mouth. Chew. Cut. Fork to mouth. Finally he rises, rinses his plate, and leaves the room.
A direct hit, sir. I salute his back with a nonmilitary gesture.
And wonder how he’s missed that I’ve been a vegetarian for more than a year.

And, don't forget bout the 'cheating', he punished her for it too! (as if being cold isn't fucking enough!!!)

I cannot remember the last time his eyes stayed on mine. After I was branded the “town slut,” he looks through me.
Maybe if we both wish hard enough, I will become invisible, with watery veins and glass bones. My translucent heart will beat on, but my father will not notice.

That's Sophie paying the price of her mom's mistake of leaving. Because before she left, it wasn't that bad, but guess what? Remembering how it used to be made it hurt even WORSE! 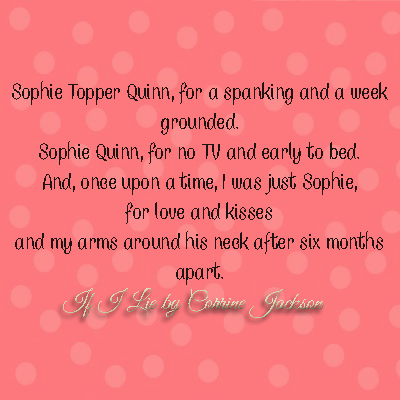 Need me to explain more about Sophie's life? No? As if I care about what you have to say..Onto the next tormentor!!!

And this time, lets go back to Carey fucking Breen.

What happened this time?

What is so freaking BIG bout this you ask me? Because he was a MARINE, risking HIS LIFE to serve for the COUNTRY and Sophie was the BITCH who dared to break his fucking heart, so she deserved to be hated as much as the Sweethaven's society could (this is what THEY think, of course). And 'THEY' included Sophie ex-friends, Sophie's schoolmates Carey's friends, and Carey's parents. WTF right? She was just a seventeen year old teen for God sake!

I wonder how much shame people can hold before they ignite. If someone strikes a match to me, I think I will explode.

I won't freaking talk bout what they did to her because seriously, I couldn't afford to cry NON-STOP because talking bout it will definitely make me do that! *wipes tiny hints of tears forming*

Why am I blaming Carey for what happened? Because he was gone (he could be tortured out there but I don't feel sorry for him because for what he made Sophie face, that was a bit mild for him) and didn't bother looking back to find out the consequences of his request to Sophie!

Lets move to another person, Ang, Sophie's ex-bestfriend (her real name was Angel but since her attitude she was almost a light year away from an angel, I won't call her Angel). She hurt my Sophie too, and since she was her bestfriend, it hurt Sophie real bad!

*cue in: me throwing Ang infront of a train*

Seriously, who wouldn't be hurt hearing that from a friend you love like hell?!! There's no forgiving that unless the hell freeze over!

I wonder if maybe I’ve been hoping too hard that our friendship could be fixed. Because this feels too broken to be put back together again.

Next, we have Carey's fucking parents. I am just EIGHT-fucking-TEEN and I'm even MATURER than them when it comes to fucking THINKING LOGICALLY!

After all the years Carey and I were friends, the Breens haven’t dropped me so much as a text.

Seriously, who freaking judge a teen based on a small 'mistake' they make? She wasn't even legally an adult and they freaking hated her for what she did. (and what she didn't wasn't even a crime!) (Umm..last I checked, adults are supposed to be MATURER than TEENS!!!)

..and our last tormentor would be Jamie the Bitchy Bitch. She was a bitcha and she was a real bitchy one at that. I hated her with everything I have!!!

That explains Jamie's attitude the from the beginning to the ending!

For some bad things, there are some good things too. Just like the yin and yang thingie and this applies to Sophie's life too. Her 'good' wasn't as good as others', but it was enough, for her. so lets highlight some of them..


During her painful moments, Sophie developed a BEAUTIFUL friendship with an old veteran soldier, George, at a hospital.

“You’re not one of those self-entitled kids who acts like a snotty bitch, are you?” he asked in a gruff voice.
I’d been through the wringer that day and didn’t feel like putting up with some stranger’s crap, so I said the first thing that came into my head.

“You’re not one of those cranky old people who uses their age as an excuse to be a prick, are you?”

He was actually her ONLY 'real' friend. And he definitely broke my heart (in a GOOD way) with his antics because unlike others, he freaking cared about Sophie, and didn't hide it.

“You need someone, girl. I won’t be around forever.” 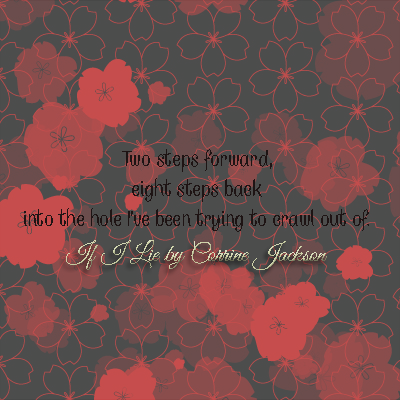 I need a NEW balnk page to explain this because one page wouldn't be enough to explain Sophie's complicated relationship with him. *sighs* I gotta try to squeeze it here tho (and hopefully manage NOT to bore you to death while at it)

Hey, everyone. You know how you’re punishing me because I cheated on that guy? He’s freaking gay and made me promise not to tell any of you. Oh, and by the way, the guy I DIDN’T cheat with? He’s Carey’s bestie, and he let you all believe that he’s a damned saint.

To understand Sophie's feelings for Blake...

I don’t feel safe with him. I feel alive in a way I never did with Carey. That should have been my first clue.

To understand Blake's feelings for Sophie...

“Don’t break my heart again, okay?”
“I promise,” I whisper back.

To understand why it was complicated... 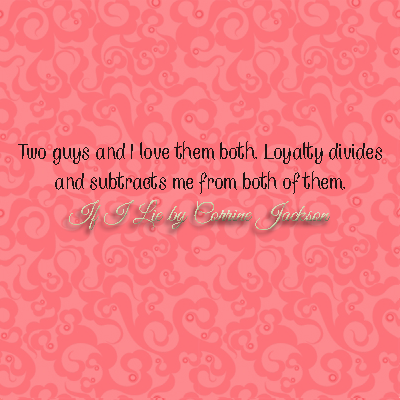 To understand the relationship... 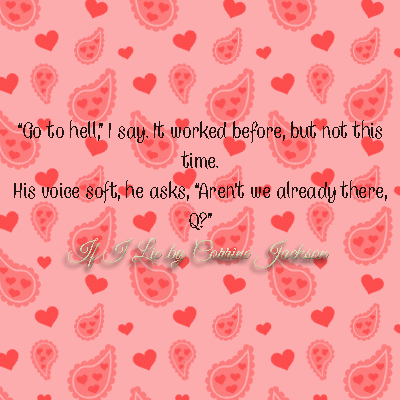 But the GOOD thing would be: 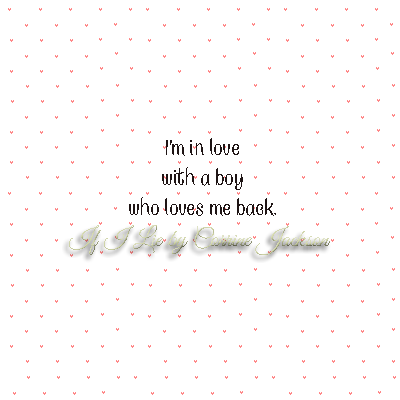 So the CONCLUSION to the STORY? 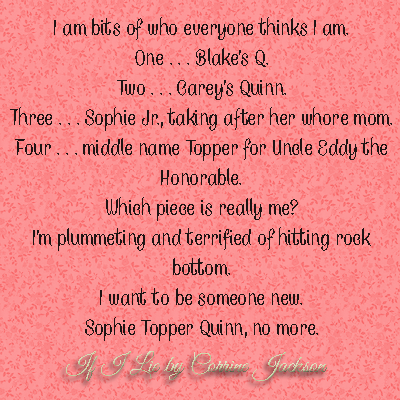 If you're planning to read this, a few BOXES of TISSUES would help, because seriously I doubt that you're gonna be able to hold your tears after reading the fantastic book. And I'm not talking bout crying at a part or two, I'm talking bout sobbing because of a dozen scenes or two! Just try it, it's definitely the BEST book I've ever read so far.